Join WICT RM, NAMIC, RMCA, and SCTE on January 24 to kick-off the new year with our 2019 Membership Kick-Off & Industry Celebration!

By attending you can:

Bring colleagues and friends to learn about these great organizations. When non-members sign up for a membership to one or more of our organizations during the event, they will receive the event registration fee discounted from the membership fee!

There will be tours of the Cable Center, and beverages & appetizers provided. 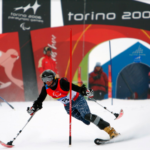 Sandy Dukat was born & raised in Canton, OH. Dukat was born with a limb deficiency in her right leg. When she was four years old, her leg was amputated above the knee. Dukat joined the swim team at the Rehabilitation Institute of Chicago in 1996 and before long was swimming with the U.S. Disabled Swim Team, setting an American record in the 800-meter freestyle at the 1998 Disabled Swimming World Championships, and was elected co-captain of the team. A 1997 trip to The Hartford Ski Spectacular, the nation’s largest ski event for people with disabilities, sparked Sandy’s interest in winter sports.Joining the U.S. Disabled Ski Team in 2000, Dukat captured two bronze medals while competing in four Alpine events at the 2002 Paralympic Games in Salt Lake City, UT. At the 2004 World Championships in Austria, Dukat skied her way to three bronze medals. She won her first gold medal at the North American World Cup in 2005 and captured the bronze in the slalom at the 2006 Paralympic Games in Torino, Italy.

In July 2007, Sandy retired from competition. But not one to sit idle, Dukat teamed with four other women with disabilities to climb Tanzania’s Mount Kilimanjaro in September 2007. In 2008, Sandy won both the World Triathlon Championships (Vancouver, Canada) for the female above the knee amputee category as well as the US Disabled National Triathlon Championships (NYC). In 2009, Dukat ran her first marathon (Phoenix, AZ) and her finishing time was 4:40.46 establishing the female above knee national record.

In 2010, for the 4th consecutive year, Dukat won the US Paratriathlon Nationals (NYC) for the female above the knee amputee category. Also in 2011, Dukat took a break from competition, got married and traveled for 3 months with her husband. In 2012, Dukat welcomed her 1st child, Mason.

Finally in 2015, Dukat joined the Range of Motion project where she hiked Cayambe (18,996 ft.) volcano in Ecuador to raise awareness and funds for those living with limb loss without access to prosthetic care in developing countries.